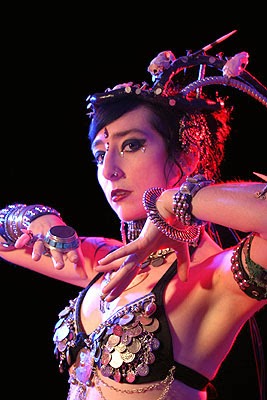 Ariellah Aflalo is a contemporary bellydance fusion dancer of Moroccan ancestry. Ariellah Aflalo is a contemporary Dark Fusion belly dancer, known for her dance technique and powerful stage presence. The signature dark flavor of her style, along with her skill as a dancer, has made her alegend in both the conventional and Gothic belly dance scenes.
Ariellah Aflalo grew up in California, raised in the traditions of her Moroccan heritage. She began to study classical ballet with the Royal Academy of Dance of London at the age of three and continued the training for the next 12 years. Upon moving to the San Francisco Bay Area, she took a hiatus from dance to complete her education and travel toIvory Coast as a member of the Peace Corps. After returning to the United States, Ariellah began studying folkloric North African belly dance under Janine Ryle. Janine was a student of Magana Baptiste and the renowned belly dance institution Hahbi ‘Ru. Ariellah soon became a member of Janine’s troupe, Dance Maghreb, which performed authentic Algerian and Berberdances. Seeing that the dance form was a natural fit for Ariellah, Janine encouraged her to seek instruction from the now legendary Rachel Brice. Ariellah began studying Tribal Fusion belly dance with Rachel in 2002 and, a year later, became one of the founding members of Rachel’s troupe, The Indigo Belly Dance Company.

When The Indigo began touring worldwide with the Bellydance Superstars, Ariellah chose to remain home where she could continue her personal dance projects and help nurture a fast-growing following of students. As the only stationary and locally accessible tie to The Indigo, as well as an innovator of Tribal Fusion belly dance in her own right, Ariellah quickly grew in popularity.
Ariellah was drawn into the goth scene in her teenage years. With an exotic background and appearance, she never quite fit in among her conventional peers but was embraced by the goth community. Ariellah began attending Death Guild — the longest-running goth club in San Francisco. There, the dance floor became an incubator for the personal style that she would later incorporate into belly dance. To this day, Ariellah continues to be involved in various artistic projects and events within the goth scene — locally, nationally, and across the world.


What is Dark Fusion Belly Dance?
From my point of view, dark fusion belly dance is one of the many offshoots of tribal fusion belly dance. Dark fusion belly dance taps into the more theatrical, dramatic, passionate and emotional side of belly dance. It utilizes the basic elemental movements of belly dance and mixes them with the dancer's darker stylizations, music and costuming. In my case as a dancer, I infused my belly dance movements with my own personal character and personality which contains much of the gothic subculture lifestyle, attitude, stylings and tastes.
Dark fusion belly dance is a mental and physical aesthetic that a dancer has inside their being, which manifests through their dance. There is a continuim of the dancer's gothic aesthetic, so to speak, that is brought to the table. I have noted that in dark fusion belly dance performances, a deep emotion is invoked in the audience and there is a sense of the audience being brought into the performance. The energy that flows from the dancer is strong and piercing and draws the audience in with its expressiveness.
How is this accomplished? Well, for one, the hands are most expressive and the energy conveyed and released in the hands and fingertips can be powerful and far reaching. Facial expressions and stage presence play a great role in dark fusion belly dance...it can be done with the eyes, gazing right into the eyes of the audience, imploring them to feel your feelings, as well as a tilt of the head this way or that way to express a thought or emotion or storyline or simply to command attention or engage or capture the surprise of the audience. I also find that in dark fusion belly dance storylines can range from fantasy type stories invoking dark shadows or snakes or myths, or invoking deities or ritual based, or simply the dancers own story, emotion and expression... 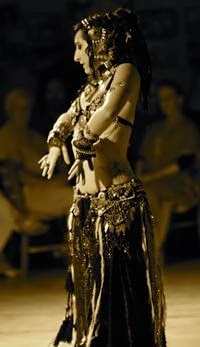 In your practice and training and performance, I encourage you to elevate your dance and find that balance between technique and artistry and emotion and dance...I encourage you to bring a higher energy to all of your movements and an awareness of your posture and an awareness of your emotions and of your own style of belly dance and how that comes through; bring drama to your dance...bring YOURSELF to your dance...elevate it...and shine ever so brightly...